BOLLINGER TO USE OAK FROM OWN FORESTS IN CHAMPAGNE

Bollinger is to use oak harvested from its own forest in the Côtes des Blancs to ferment the juice from this year’s vintage. 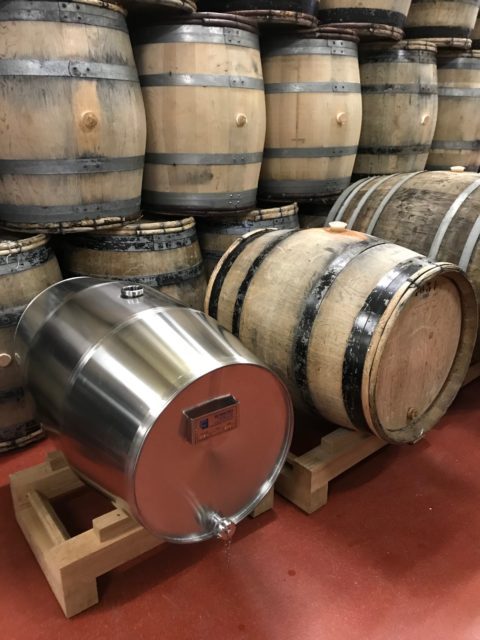 Experimental barrels at Bollinger including a stainless steel 200 litre version

According to Bollinger cellar master Gilles Descôtes, in 2016 it was decided by the Champagne house to fell three trees from this forest, each over 100 years old, with one oak producing enough staves to make around 10 barrels.

Having seasoned the oak staves for the past three years, Descôtes said that he expected to have between 20 to 30 barrels from these trees in time for this year’s harvest.

Although the house uses oak barrels to ferment all its wines for its premium expressions, such as its Grand Année, none of the vessels employ new staves, which can impart strong flavours, above all vanilla.

However, Descôtes said that the barrels being made from Bollinger’s own forest would only account for around 1% of the oak used to ferment the wine from this year’s harvest, and therefore would have little if any perceptible influence.

Bollinger has as many as 3,500 oak barrels in its cellar in Aÿ, and it is the only Champagne house to have its own full-time cooper, who repairs on average 350 barrels per year.

The average age of barrel at Bollinger is 20 years, with the vessels ranging from five years in age to 35 – the oldest used by the Champagne house.

According to the cooper, Denis Saint-Auroman (pictured below) – who has worked for Bollinger for 26 years – 80% of his time is spent repairing the stave where the bung goes it, as this tends to be the weakest due to the hole in the wood.

The oak used for the barrels at Bollinger comes from Burgundy – where the group owns the Beaune-based négociant Chanson Père & Fils – and the Champagne house takes only those barrels that have been used to ferment and age Chardonnay.

Bollinger is experimenting with different fermentation vessels, including a 200-litre stainless steel barrel (picture above).

CHAMPAGNE AGED IN GOLD SET FOR RELEASE IN 2021 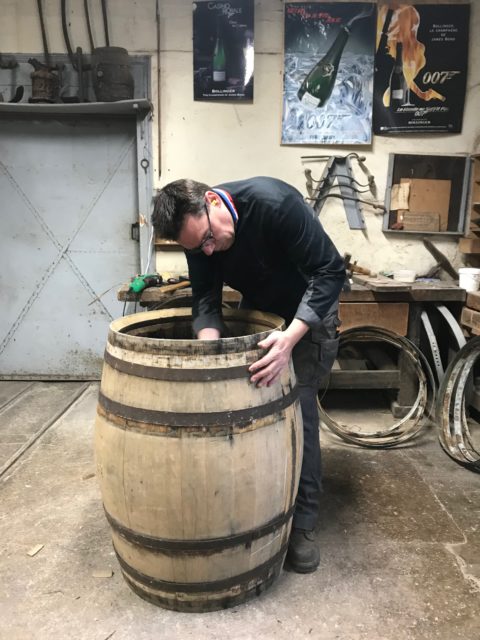 Can I purchase wine from another Province from your website?

No, each Province’s list is specific to that market. Orders can only be fulfilled in market. If you see something of interest we can put you in touch with a representative in your market to update on future orders or arrivals specific to your Province.

Can I buy a single bottle?

As an importer we cannot vend directly to the consumer. All orders must pass through a retailer (either a government liquor store or a private wine or liquor store). As the retailer must purchase a full case, we can only accept orders for full cases. If you are interested in purchasing wine in quantities less than a case, please contact us and we can refer you to a location that stocks our wines.

Will I receive an order confirmation?

You will receive a confirmation from us via email or phone.

Where and when can I pick up my order?

Orders can be sent to a government liquor store or a private wine store or liquor Store. When you first order, we will recommend a retail store for you to pick up your order with respect to your location. The retailer will contact you via phone or email  when your order is ready to be picked up on site.

What are the order arrival lead times?

When should I pay my for my order?

You pay for your order at the selected retail location at pick up.

Please advise us of any changes in your customer information, pick up location, as well as the phone number.

What should I do if one or more bottles are corked or defective?

If one or more bottles are corked, the customer can return the goods to the retailer from whom the order was purchased.  Proof of purchase is required for replacement or refund.

What should I do if I don't like the wine I ordered?

In the case of non-defective bottles, no return or refund will be accepted.

Check your emails to confirm your request